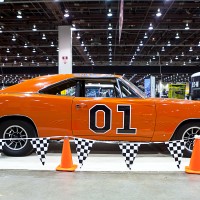 Warner Brothers who owns the rights to the General Lee is going to pull the rights to produce the original car as a toy.  Click here to read the full story.  This all comes out of the huge stink about the confederate flag.  The Flag is on the roof of the General Lee and the company says they will not longer allow that version to be made.  I am blown away by this…they were always “Good Ol Boys Never Meaning No Harm”…..well guys you are now walking.  These guys will probably change the name of the car too….call it the orange car the Duke Brothers Drive on TV.  Most people will remember the shot of the Duke Boys with the car and Daisey Duke on the Roof of the Car…..In this shot you may have not noticed but she is on top of a Confederate Flag…..on the Roof….You may also have not seen the car or the Two Duke Boys…but all of that is in the photo.

Dennis DeYoung & The Music of Styx in Kansas City

Mike The Intern wants to be Your Intern!